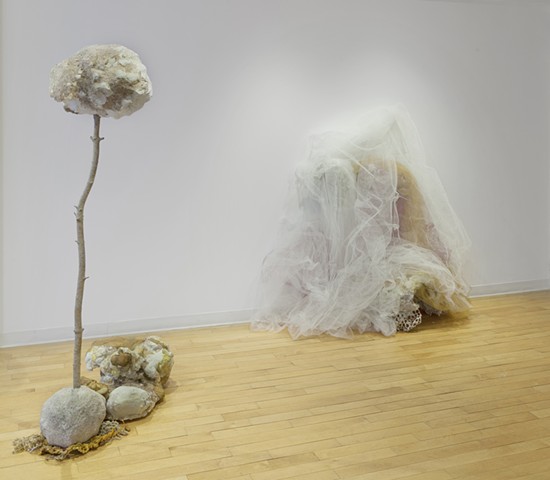 STATEMENT FROM THE ARTIST SAY I AM YOU The 12th century Sufi mystic and poet Rumi was devoted to the workings of the universe and forces he could not see. He exudes love. In his poem, Say I Am You, [[https://www.goodreads.com/quotes/1205504-say-i-am- you-i-am-dust-particles-in-sunlight] his longing to join everything existing is an indication of how we might repair ourselves and our broken environment. Now in front of us is this extraordinary moment in the 4.5-billion-year history of the earth: we sense that it is the camel going through the eye of the needle. Dealing with Covid was our rehearsal. We almost came to reckon with a Martin Buber I -and -Thou - like ethos, but not quite. Exchange and cooperation are often the norms in nature but we seem surprised to re-discover now that competition is not the sole rule of survival. But this does not fit with our predominant model of colonialism, enslavement, self-serving capitalism, and the environment as our candy store. We could be on the edge of a crumbling cliff with no recourse. For me this picture is only reparable by referring to Rumi and others who long ago understood that separating ourselves from the ways of the universe is the un-making of all that exists. After presenting three exhibits with an apocalyptic view of our world I have found my inner stamina unable to continuously sustain this outlook. In the poem, Say I Am You, I find a reflection of the other side: a clear pond cradling a parallel world, silent and achingly beautiful. Several changes have influenced my current work . When I moved from a lifetime of painting some years ago to the world of sculpture I became delirious with the variety of materials available; this new path, from flat

to three dimensions, has revitalized my senses. Precision is subjugated to flow. If something doesn’t work it goes on the discard pile and could be rescued later to be absorbed into another piece. Also, during the pandemic I spent a long time in Maine where I renewed the intimate relationship with nature that I had as a child, an essential shift. I have become rather a simpleton with forms, recombining what I see “out there” into presences in the studio. The process of transcription is like looking into that clear pond and acknowledging the dual magic of water as scrim over the objects below and the reflector of the world above. I am realizing that forms are only front- room representatives of what we perceive and that they can hold unseen movements, some of them monumental, some indescribably delicate. How to enfold this? This is the electrifying parallel world, the invisible/visible universe that Rumi felt. How could we not engage?